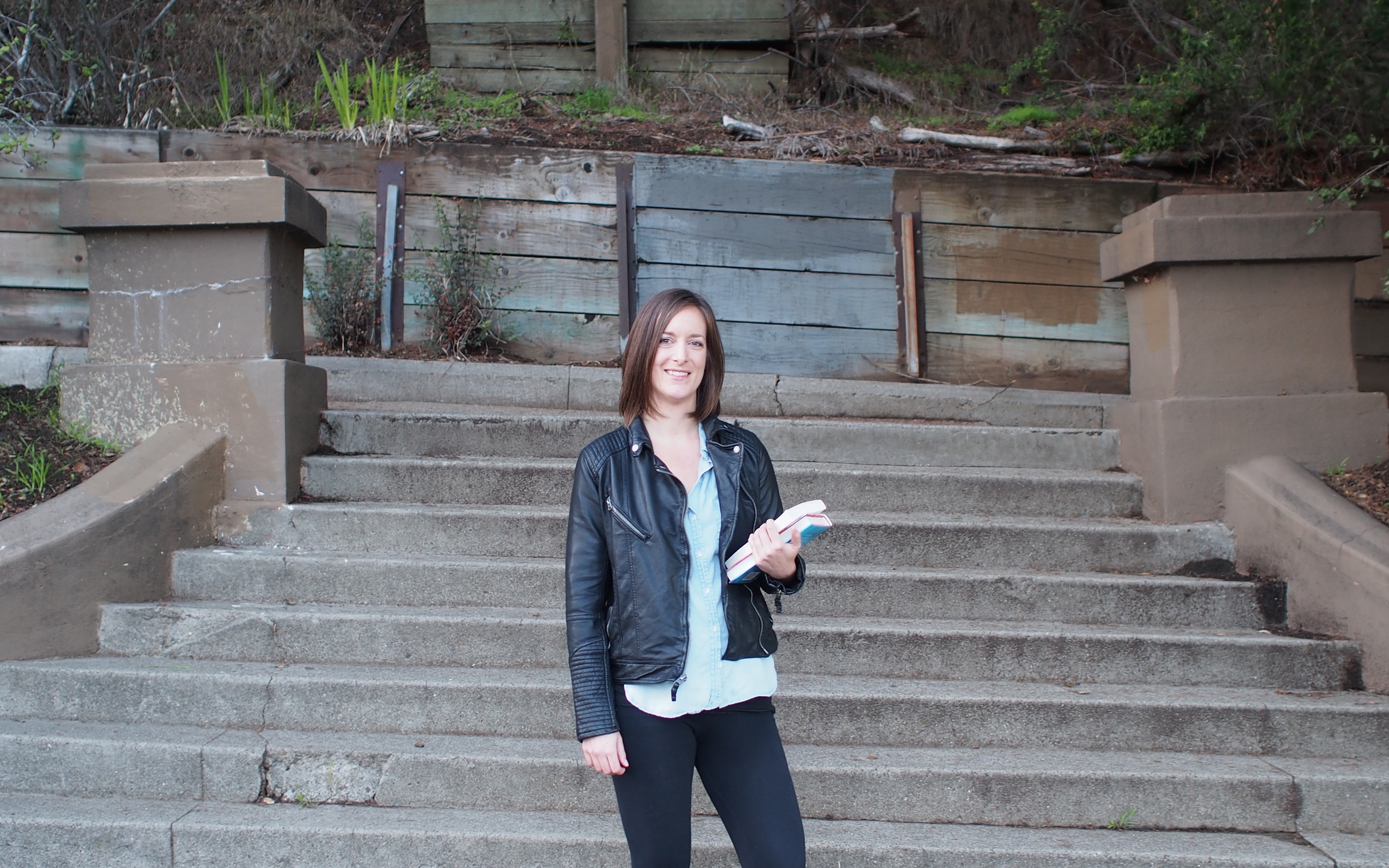 Startups are synonymous with starting over. We are quick to laud the scrappy hustle to the top as a feat of innovative strength, but what it begins with is accepting that nothing can stay the same and a willingness to wade deep into uncertainty.

Dani Fankhauser, co-founder of ReadThisNext, is well accustomed to this reality. I met Dani after I moved to New York three years ago. I moved there knowing almost no one, thinking that friendship was a numbers game and the city would be a mecca of besties by sheer population alone. I quickly learned that the opposite was true. Loneliness drove me to community at church, and there I found Dani.

Dani’s quiet demeanor left an impression. Our early days were marked by me making endless small talk and her nodding politely. When I learned to let the stillness between us linger, she filled it with whip-smart insights. The more we hung out, the more I was able to see a life that was dynamic and guided by serious sincerity. Dani is pragmatic yet deeply spiritual, humorously dry yet quick with kindness, simple in daily practices yet never skimping on big, messy dreams.

Which leads us to where she is now. Last year, Dani left her 9-to-5 job as a Branded Content Editor at Bustle to devote more time to developing an app that connects book lovers to their next favorite read, based on recommendations from the authors they most enjoy. Last summer, Dani and co-founder Elisha Hartwig took to Kickstarter to fund the launch of ReadThisNext and were able to raise $25,000 in just one month. As if that wasn’t enough to prove she was serious about getting shit done, Dani then moved to San Francisco to be closer to Silicon Valley’s startup scene.

I had an East-meets-West phone call with her to discuss what it means to be a lady entrepreneur and all-around babe. 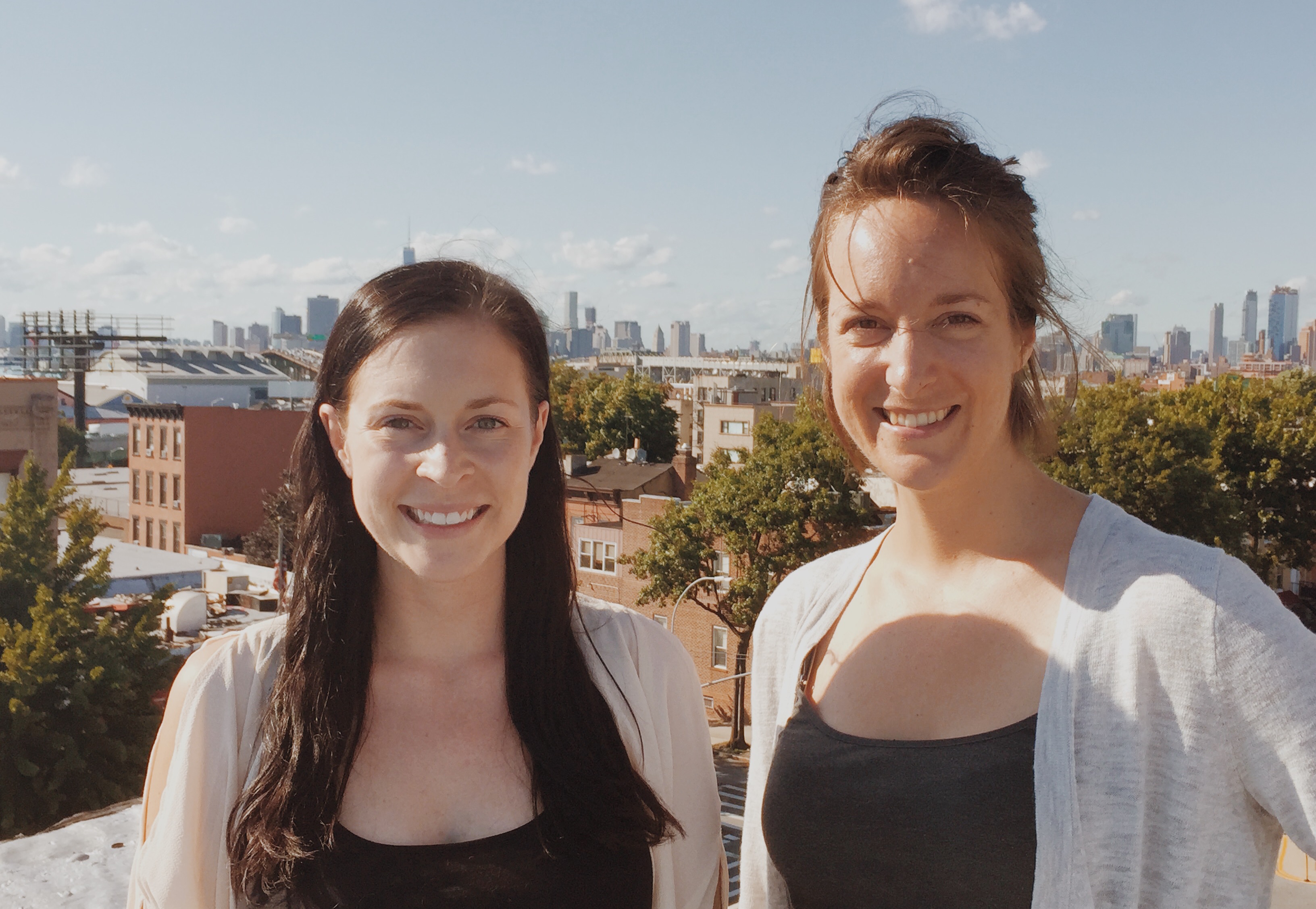 Why did you decide to develop ReadThisNext?

Before the web took over, I used to frequent bookstores a lot. Online book shopping still does not compare. Many book sites like Amazon have way too much information on the page–user reviews, multiple publisher reviews, starred ratings, product descriptions…etcetera. When you’re in a bookstore, the act of picking out a book is simple: you see a cover that interests you and skim the back. I wanted to create an online experience that had the simplicity of going to a bookstore; an app that focused on cover art and essential data points only, like an author’s name or bio, book title, book cover, book description, and any recommendations they’ve written. ReadThisNext is more about a networking effect than overloading the user with information. One book leads to another.

The other thing that inspired me was my initial desire to write a book. When I dove deeper into the process behind that, I quickly learned how many hoops authors have to jump through. You need an agent. Once you have an agent, your agent needs to pitch to publishers and even after that, it is a ton of self-promotion. I wanted to make it easier for authors to promote their books and get them in the hands of potential readers. ReadThisNext does this by taking author recommendations already created for publishers and placing them in a network. When you look up a favorite author, you’ll see all the books they’ve recommended. The app sets the stage for better cross promotion.

Give us all your elevator pitch on why we should join ReadThisNext. Ready, GO!

ReadThisNext is the only book site that has author reviews and recommendations built into its algorithm. Authors write reviews that appear as blurbs or quotes on the back of book jackets for other authors. They are constantly writing new ones for their publishers. We were able to secure data feeds from New York’s top five publishers (with plans of continuing to expand our database) that include author reviews and recommendations. We funnel these blurbs into ReadThisNext and allow you to get notifications when your favorite author has reviewed a new book. Thus, you get higher quality book recommendations than other sites. Publishers have been using these review databases for over a century, and bookstore owners reference them when deciding what to stock on their shelves. Consumers, however, have never had access to them – until now.

Whoa. How do you collect this secret data?

Booksellers and their websites use the same information. But I wanted to partner with publishers to give us a more consistent, reliable source. We formed relationships with best-in-industry publishers and now are on the data list that gets sent each week to stores and PR reps.

The reason the information is valuable is because of the human touch that is present in the process. When a publisher reaches out to an author to write a book review, they are using industry intuition to identify similarities between two writing styles. Other algorithms and book websites are terrible at drawing connections as to why someone would like a book. They are either too obvious, like, “Oh, you enjoy Harry Potter? Read Harry Potter 2!” or too genre-based, as in, “You like romance? Read Jane Austen!” People look for books that are similar but not the same. Machine recommendations have a hard time deciphering those nuances. ReadThisNext is not recommendations based on a topic or theme–it is human choice-making turned into an app. 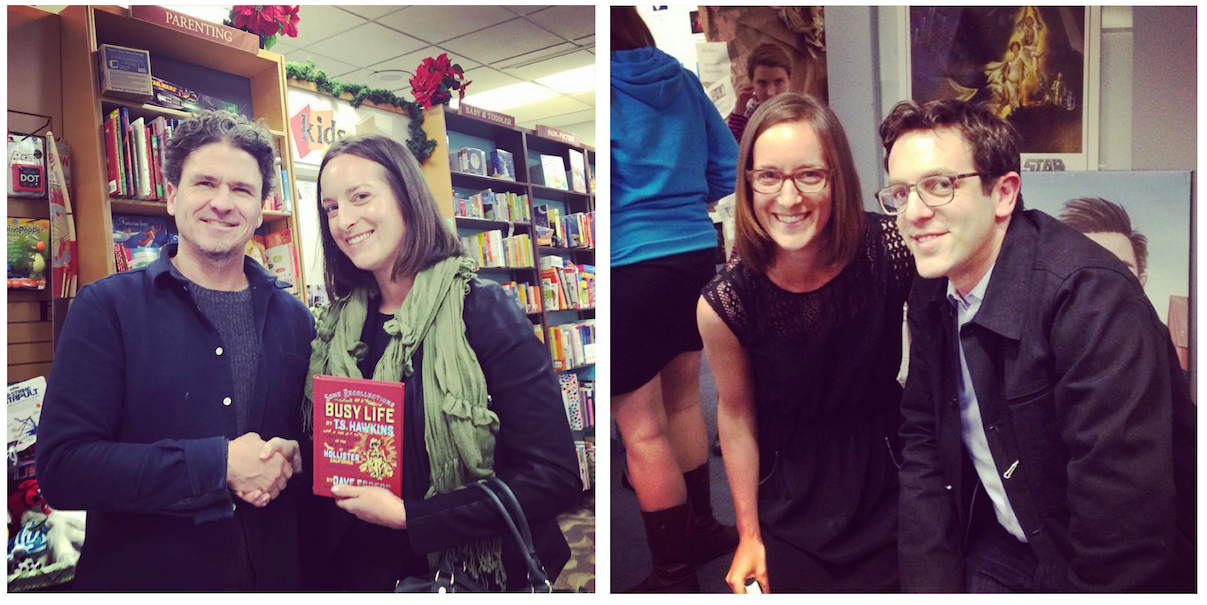 Since you founded a book-based startup, I need to ask you what your favorite book is.

What does your two-year plan for ReadThisNext look like? How about five years down the road?

We’re working on promotion programs for authors. The program is in its pilot phase and should be launching in March. It includes being flagged as a featured author within the app, a profile in our weekly newsletter, and a designated amount of sponsored blog and social content.

In five years, it’d be amazing to have a physical space. Our primary product is currently the app. But a good part of the app is people taking photos of books and posting them. If we could expand the app into reading together in a physical space, it could be really interesting. Amazon actually just opened up a physical bookstore.

There has been talk of a wine-themed book shop. Or book-themed wine shop. Somewhere we could host reading parties or author events. Reading is incredibly social–especially for introverts. I can think of nothing better than reading in a room full of other people reading…with wine flowing. The app is sort of a digital version of that idea. 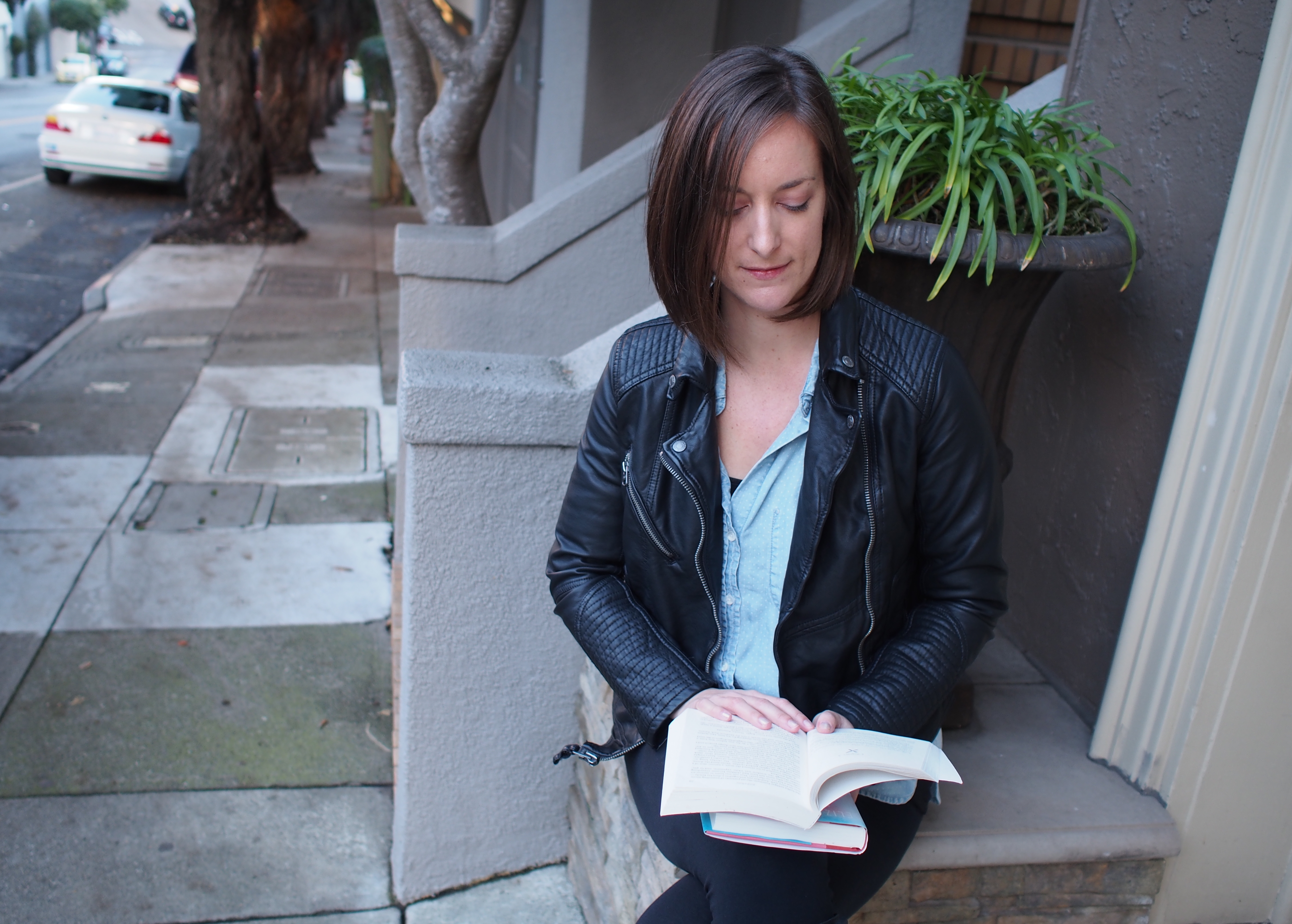 I will be there for the ribbon cutting, glass in hand. Lately, I’ve noticed an influx of female entrepreneur proponents with a million messages, like: Lean in! Tuck your elbows! Poop discretely! How did you cut through all of that and learn what it means to be a business woman?

There are so many messages, and if you did all of them, you wouldn’t accomplish anything. Go with your gut and don’t be swayed.

I’ve had people give me advice that isn’t even relevant. For example, in the past six months, I’ve been stuck behind a computer screen coding. A lot of other founders I knew were talking about download numbers or flashy promotions they were doing. I immediately got jealous. But I knew this was the time where I had to produce–not promote. Now that the app has launched, I can devote myself to outreach and advertising.

Feel free to market yourself as a grade-A certified babe. You wrote an amazing essay recently on a trip to Morocco that went sour. One quote that stuck with me was, “What I was really chasing wasn’t world travel, it was being vulnerable.” Have you had opportunities to embrace vulnerability since then?

In the summer, I moved to San Francisco while working on finishing up ReadThisNext’s Kickstarter campaign. I got pretty depressed. I would think back to my old job, my apartment, and my great roommate. But I remembered that, despite having all of that, I still wasn’t happy. I had a lot of pent-up potential, and felt like I could be bringing more to the table. I wasn’t at a level of autonomy or responsibility that felt right.

In general, putting your name on a product makes you vulnerable, too. You see that you’ve made something cool, but there is still so much that needs to be improved. 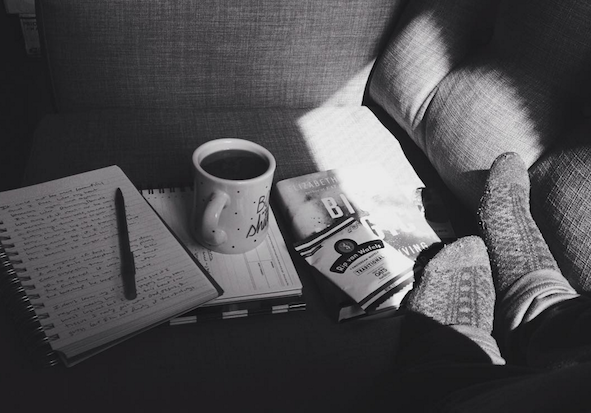 Does your faith make it easier to take risks or entertain the possibility of failure?

It’s definitely a place to go when life gets hard. A component of my faith is the belief that there is a reason and purpose for everything. I don’t get hung up on regrets thinking, “Oh, I’ve made a horrible mistake, and I’ll never be the same again.” Instead, I see it as a choice. I made one choice instead of another. At a startup, you are forced to make decisions fast. Trusting God and not dwelling makes it easier to keep moving forward.

You are someone who has been de-cluttering their life à la Marie Kondolong before it was trendy. What has kept you away from an obsession with possessing stuff?

I’ve just had bigger goals on my mind–the desire to build something. If it’s not about money, then it’s about time. When I was first learning coding, I would get up three hours earlier, take a quick jog, shower and then code till I left for work. There is little space for error, and that applies to finances, too.

It’s not like you are never going to buy stuff, but what happens when you only give yourself space, moment by moment, to really hone in on what has the biggest impact? 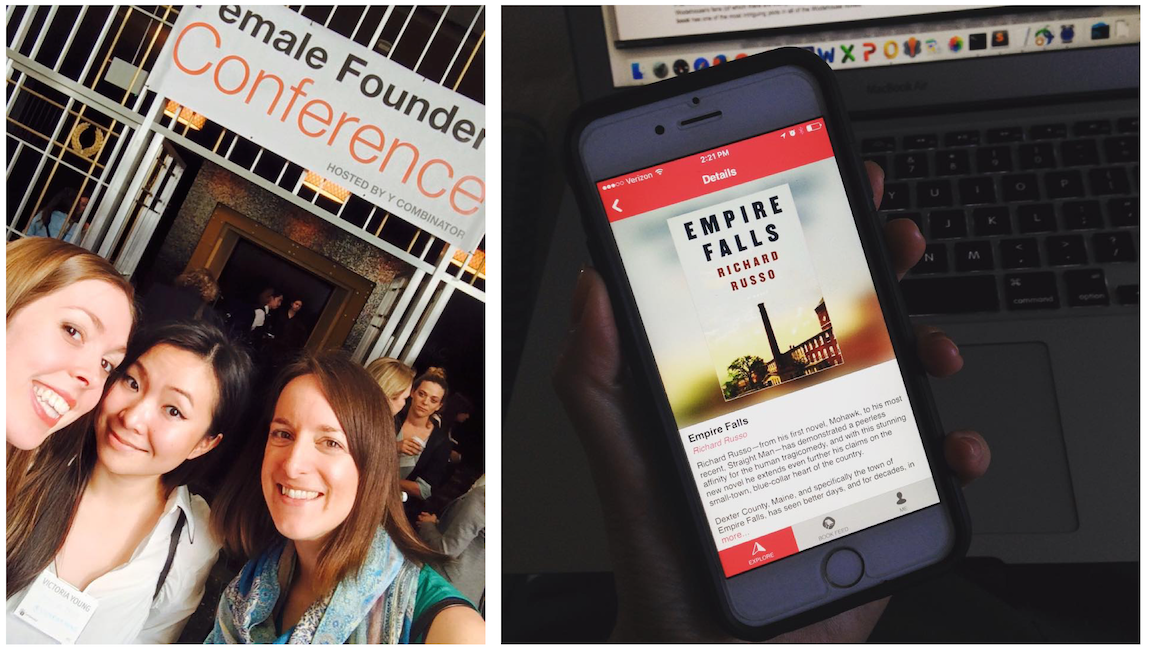 Dani at Female Founders Conference (left) and the app

I get sidetracked way too often. How do you stay motivated?

It’s important to get other people involved any way you can, even if they aren’t directly affiliated with your project. ReadThisNext has a blog and Facebook page. Often, I see that someone new is following us and I am like, “I don’t know where you came from, but you found us and appreciate us.” That’s huge motivation.

Before ReadThisNext had an online presence, I was a part of a female entrepreneur brag group where we would share big and tiny wins with each other daily. With any creative goal, there are times when you want to give up, and if you don’t have anyone to tell about it, no one will know you quit! When someone says, “How is that book app going?” your brain says, “Ahhh! I better keep moving!” 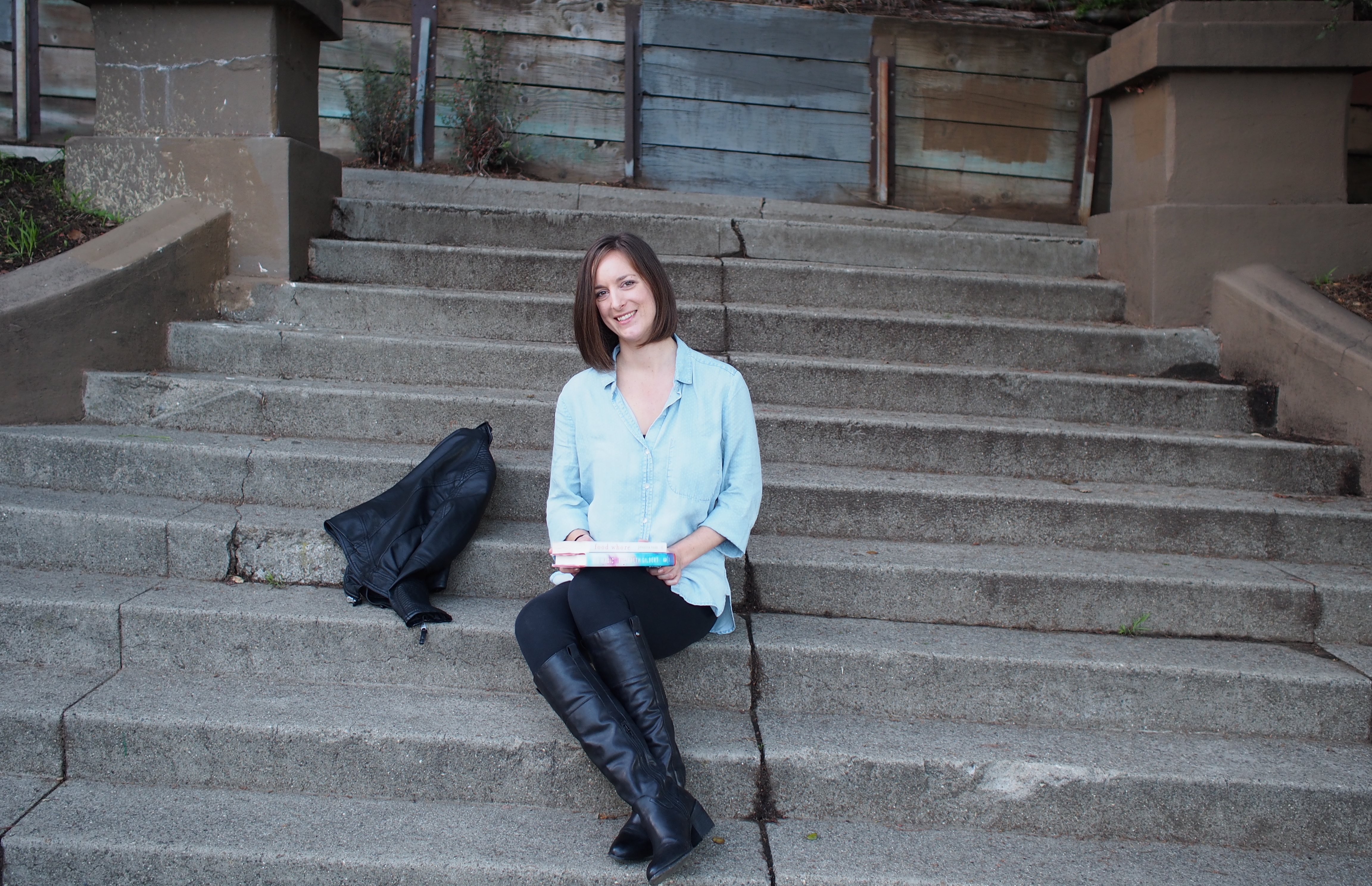 Do you consider yourself successful, and how do you define success?

Yeah, I do. I think it’s really hard with startups because so many fail and for so much of startup life, you’re striving not to fail. I think it boils down to goal building. I usually have three big goals per week that I try to get done. It might be sending a simple email, writing a chunk of code. If I get that one item done per day, I’ve been a success. I think framing it that way is key. Incremental goals you can achieve are really important for the long term.

Launching the app has been a great learning experience, but so much more chaotic than I ever imagined. “Going all in” is glorified in our culture, but I think setting realistic expectations is important and keeps you from becoming burnt out.